David Finkel PhotographyJuly 27, 2010Central America, Uncategorized0 comments
(Note:  these are images off the internet and not my own photos).

I decided to travel “light” in terms of camera gear this trip, and so I am using my Powershot G9 compact camera.   I have an underwater housing for my DSLRs, but since I chose not to haul all my gear with us, that wouldn’t do me any use.   I ordered up a housing for the G9 before we left and it arrived two days before we departed.  Unfortunately the housing was damaged and this particular model wasn’t very good, so I had to send it back.   They had a Canon underwater housing at our local photo store in Austin, but only for the G10, which is just different enough to not work for my camera.   On the day before we left, 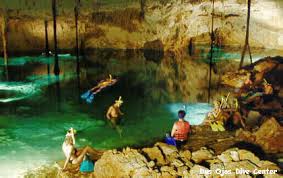 I miraculously found someone on Craigs List in Austin selling the exact housing I needed for a good price.  I called him and he was on his way to a meeting, but agreed to call me when the meeting was over so we could meet and I could get the housing.  He never called and despite my repeated calls to him, he never answered  He also took the item off Craigs List, so I can only assume he sold it to someone else.  I was amazingly disappointed and so I’ve not been able to do any underwater photos in Belize or Mexico.

But I wanted to give you some idea of the fantastic sites we saw today as we went cenote diving.  Cave diving is a highly technical discipline and involves a lot of risk.  TO become a cave diver, one has to have about 100 previous open water dives and technical training before you can take a course than involves 17 additional dives.   We were not cave diving! 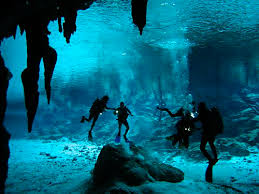 Instead we were cavern diving, which may sound like a technicality, but has very strict rules.  For one thing, it must be lead by a qualified cave diver and our divemaster was Budgie, a retired British Navy diver with tons of experience.  You can also only dive with a maximum of 4 people under the dive master’s care, and you are restricted to staying within a set distance of open water.  Although parts of the dive are enclosed in caverns, there is always space to surface just a little further up, or a little behind you, and you have to stay close to areas lit by daylight.  As it was cloudy, overcast and very rainy, our cavern Dos Ojos in the Xel Ha park) was very dim.   Each of us had underwater flashlights and Budgie and I had high powered primary lights.

The caves are fantastic – full of stalagmites, stalactites, columns and other cave features, but all submerged.  There are also some fish in the cave, including cyclids and neons.  The cave is part of a huge freshwater underground river system that intereconnects with other caves and goes on for at leave 60 miles underground.  The dives themselves aren’ very deep – our maximum depth was only about 30′ and we did two dives, each about 45 minutes long.  By contrast, some of the cave dives are extremely deep – as much as 400′ or more.

Our 2nd dive took us inside a cave area that is populated by bats who enter and exit through a small hole in the roof.  A fun day’s diving, although Aaron prefers the open ocean and playing with sharks!

Tomorrow we fly from Cancun to Guatemala for the final leg of our journey in La Antigua.

Related Articles
A Vexillological Guide to Amsterdam
Dub-Dub, Dubrovnik to Dublin
Eating in the Balkans